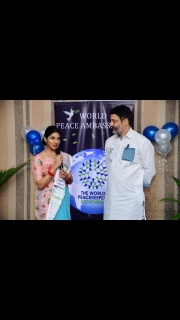 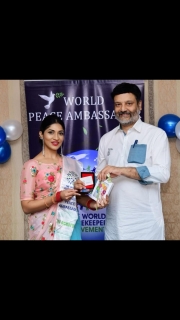 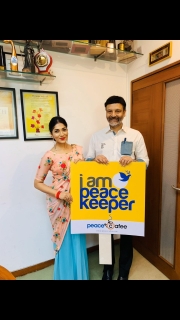 Actress Iti Acharya was recently felicitated as the world peace ambassador as a gesture towards her involvement in various peace initiatives around the country. The actress flew down to Mumbai to accept this honor from the founder of The World Peacekeepers Movement Sir Dr.Huzaifa Khorakiwala who is also the trustee of Wockhardt Foundation.

The actress has joint various social initiatives inorder to try and make the world a better place to be in. She was recently elected as the member of the Anti Corruption Commission after the committee noticed her enthusiasm towards social causes.She is even the secretary of the International Human Rights commission in Bangalore.

“I feel honoured to be apart of this peace makers chain,Its a great initiative started by Dr.Huz and his team.One can start maintaining peace from one’s house itself and then move on to spreading peace and its principles amongst their friends,society relatives etc.”
The world Peacekeepers Movement is aimed at spreading world peace through the formation of world’s largest army,The World Peace Army.The World Peace army with 2 million peacemakers is the world’s 2nd largest army.