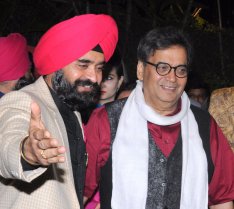 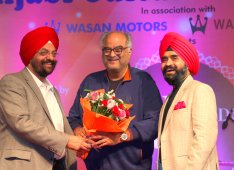 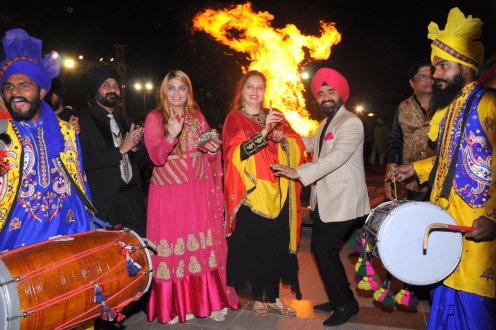 Lohri festival is here and seen were the Bollywood and television celebrities geared up
for the festive day. Punjabis were seen rocking while celebrating the festival Lohri Di
Raat with bonfire and great enthusiasm which was organized by Shri. Charan Singh
Sapra. The ‘Lohri Di Raat’ festival was graced by many celebs from Bollywood like Sonu
Sood, Jeetendra, Ayushman Khurana, Gavie Chahal, Parmeet Sethi, Bonnie Kapoor, Avtar Gill and Subhash Ghai. This auspicious festival event is hosted annually by Shri
Charan Singh Sapra, President of NGO Punjabi Cultural Heritage Board. Actor Jitendra
was the first to arrive and was seen enjoying the fabulous traditional songs which were
sung by ‘Sufi Sparrow’ singers Dolly Sidhu and Roop Sidhu. Mr. Sapra spoke about the importance of Lohri fest and how every Punjabi feels
connected with it in Mumbai too. PCHB celebrates Lohri every year to promote the Rich
Heritage & Culture of Punjab amongst the younger generation here. Actor Ayushman
Khurana was seen enjoying on the tunes of Punjabi music. He mentioned how he still
remembers the Lohri fest memories of his childhood. He sang a couple of songs too on
the request of his fans.
Actor Sonu Sood said, “Lohri signals the end of winter and the advent of spring so the
celebration reflects warmth”. People were seen gathering round the bonfire throwing
sweets, puffed rice and popcorn into the flames, singing popular songs and exchanging
greetings with each other.
Actor Jeetendra was seen enjoying and dancing to the Punjabi music. He mentioned that
he loves this festival and he is very happy that Mr. Charan Singh Sapra has invited him to